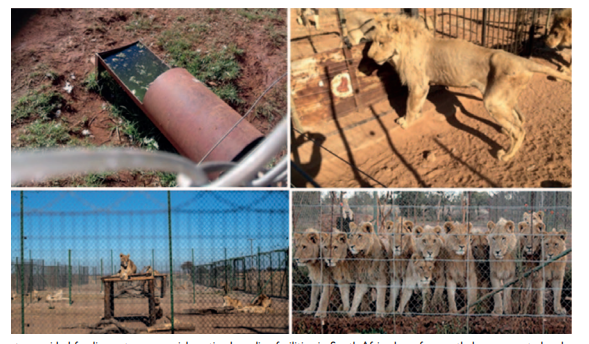 Lack of studies on animal captive breeding is  threatening  the welfare of lions in South Africa, a new scientific analysis shows.

“With a substantial captive lion industry of more than 350 commercial facilities holding between 8,000-10,000 lions and the complete absence of scientific welfare studies in that industry, we are in the dark in terms of the extent and nature of the welfare issues we are dealing with,” Dr. Louise de Waal, Director Blood Lions, said in a statement.

“The many atrocities found by the National Council of Societies for the Prevention of Cruelty to Animals (NSPCA) on commercial lion farms during welfare inspections show that we are not dealing with theoretical challenges, but rather a very real and highly problematic situation.”

The study found out that a wide range of diseases, injuries, malnutrition and obesity, lack of (clean) water, and abnormal behaviours like excessive pacing and self-mutilation (which were all associated with the keeping of captive lions in facilities such as zoos, wildlife parks and sanctuaries across the globe), are some of the welfare challenges facing lions in the commercial captive predator industry in South Africa face on a day-to-day basis.

“It is under such commercial conditions that lions are most likely to face the biggest welfare atrocities compared to any other captive environment, as the emphasis is on intensive breeding practices that are consumer-driven and income-generation focused and generally don’t adequately address animal welfare and well-being. The lack of welfare studies from commercial lion farms is a major research gap that needs to be addressed urgently,” Dr. De Waal said.

According to the study, lack of income for captive wildlife facilities during the COVID-19 pandemic coupled with the absence of national welfare norms and standards for the captive breeding, keeping and trade of lions and other big cats in South Africa, has put the existing big cats in captivity at even more risk of serious welfare issues.

Meanwhile, on 2nd May 2021, Minister Barbara Creecy of the Department of Forestry, Fisheries and the Environment (DFFE) announced that South Africa would no longer breed and keep captive lions or use captive lions or their derivatives commercially.

However, a full year down the line, this announcement and the status of the commercial lion industry remains the same. Furthermore, the uncertainty of its future is most likely exacerbating the welfare concerns for the captive lions involved.

Although the Minister did once again decide to set a zero CITES export quota for trade in lion parts and derivatives including lion bones, as has been the case for the past three years, the breeding, canned hunting, and live trade of captive-bred lions is still legal as are all interactive tourism encounters with cubs and sub-adult big cats.

“We urge the Minister to keep the pressure on the progress of the upcoming legislative changes, as in the meantime the welfare of thousands of lions and other big cats hangs in the balance,” Edith Kabesiime, Wildlife Campaigns Manager at World Animal Protection said.

“We appeal to the Minister to urgently carry out a comprehensive national audit of the current commercial captive lion industry, including the welfare conditions of the big cats involved, in order to minimise unintended negative welfare impacts during the planned phase out of the industry in South Africa.”