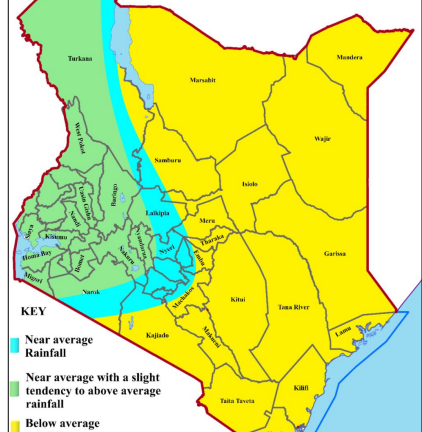 Although the month of October usually marks the onset of short rains in some parts of the country, Kenya Meteorological Department(KMD) warns that the country is likely to experience delayed onset marked by intervals of dry spell particularly in the Eastern region.

The weather department notes that most parts of the country are likely to experience rain onset between the fourth week of October and the second week of November 2022. However, some parts of the country including Highlands West of the Rift Valley are expected to continue receiving rainfall.

The October rainfall is also expected to be unevenly distributed across the country, both in time and space with several counties in the Highlands West of the Rift Valley, the Lake Victoria Basin, the Southern and Central Rift Valley regions and a few areas in the Northwest likely to receive near-average rainfall with a slight tendency to exceed average.

While Trans Nzoia, Kericho, Bomet, Nandi, Uasin Gishu, West Pokot, Elgeyo Marakwet, Kakamega, Vihiga, Bungoma, Kisii and Nyamira, Kisumu, Homa Bay, Migori, Siaya and Busia, Nakuru, parts of Narok, Baringo and parts of Laikipia and Nyandarua counties are likely to experience occasional showers and thunderstorms during the month, the expected total rainfall amounts are likely to be near the long-term average amounts for October or above.

Furthermore, rainfall is likely to be near to below average in some parts of the Highlands East of the Rift Valley and in some parts of the Northwest including Kirinyaga, Nyeri, Murang’a, Embu, Meru, Nairobi, Kiambu, and Tharaka Nithi, whereas the South-Eastern lowlands, the coast and the north-eastern regions such as Lamu, Kilifi, Mombasa, Kwale and Tana, Machakos, Makueni, Kitui, TaitaTaveta and Kajiado counties likely to receive below average rainfall.

Sunny and dry conditions throughout the month are expected in the Northeastern Kenya including Marsabit, Isiolo, Wajir, Mandera, Garissa and parts of Northwestern Kenya such as Samburu county.

This is likely to lead to weather-related impacts including reduction in the availability of water, pasture and browse for livestock consumption and decline in water availability for both human and livestock use in the arid and semi-arid lands (ASAL)  which may lead to cases of nutrition-related and water-borne diseases like diarrhea, dysentery, and cholera.

Also, the ongoing drought in the ASAL areas of the country’s northern and eastern parts is expected to worsen and may cause increase in resource-based conflicts, particularly over water and pasture, among livestock communities and conflicts between people and wildlife.

To reduce such occurrences, KMD has urged relevant authorities to keep a keen look and provide relevant services including foraging areas and watering holes for wildlife, safe drinking water as well as water treatment chemicals to communities that rely on open sources of water and improve water management and tracking to ensure that adequate water resources are available for human and livestock needs in these areas.