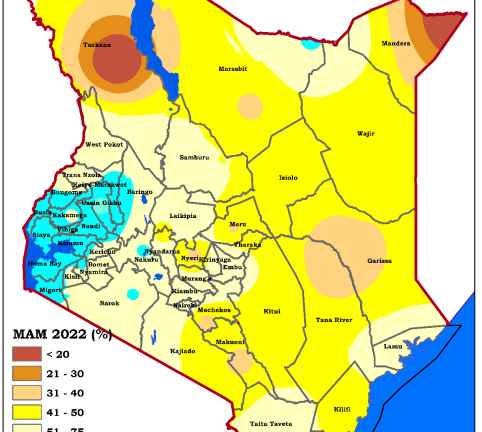 The amount of rainfall Kenya has been receiving during the long rains season which lasts from March to May has decreased.

This is according to an assessment by the Kenya Meteorological Department(KMD) on rainfall recorded for this period.

The weather organization notes that the performance rainfall recorded from 1st March to 26th May 2022 was generally below average over most parts of the country except Eldoret, Kisumu, Nakuru, Moyale, and Narok which recorded near average rainfall with all other stations recording depressed rainfall.

Furthermore, the month of March was generally dry until the fourth week where rainfall was experienced over several parts of the country. Likewise, April was also characterized by long dry spells during the first half over most parts with dry weather conditions also observed in the month of May over several parts except over the Highlands West of the Rift Valley, Lake Victoria Basin, Central and South Rift Valley, the Coastal region, and a few areas over the Highlands East of the Rift Valley where rainfall was recorded.

With most economic activities like crop farming, livestock keeping, hydro-energy generation, transport, tourism, and other climate dependent sectors relying heavily on rainfall patterns in Kenya, KMD thus urges national and county governments, as well as humanitarian organizations to enhance the measures that are already being implemented to avert the loss of lives, livelihoods, and livestock by ensuring that efficient water management and trucking is carried out to ensure enough water resources are available for the animal and human population needs in these areas and careful reservoir management and continuous monitoring of water levels in order to stabilize power production.

The shortage of water, food and pasture for both human and livestock over the ASAL areas of the Northeastern and parts of Northwestern Kenya is expected to worsen owing to the poor performance of the March-May rainfall season and the dry conditions expected over these regions during the June to August(JJA) season.

However, the expected occasional rainfall during the JJA season over the Highlands West of the Rift Valley, the Lake Victoria Basin, and Central and South Rift Valley is likely to maintain sufficient soil moisture for agricultural production.  Therefore, the public are advised to take advantage of this by growing trees to increase tree cover and maximize on crop yield through appropriate farming and land-use management practices.