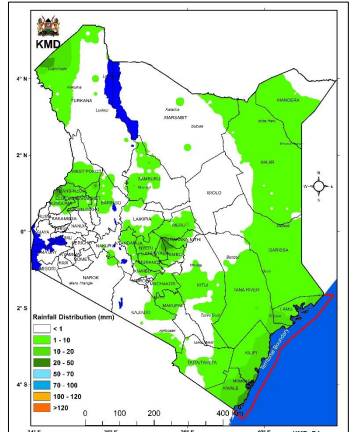 In the next seven days, very low temperatures of up to 5 degrees Celsius are expected at night within Nairobi, Nyandarua, Laikipia, Nyeri, Kirinyaga, Murang’a, Kiambu, Meru, Embu and Tharaka-Nithi counties, according to Kenya Meteorological Department(KMD) weekly forecast.

KMD also warns against the expected strong southerly winds with speeds exceeding 12.9m/s that is likely to occur over the Coast, the South-eastern lowlands and North-eastern Kenya.

After comparing the previous review period (20-26 June 2022) to the current review period (27 June-3 July 2022), KMD noted that there was a decrease in rainfall amounts over the North Rift Valley and an increase over the Coast.