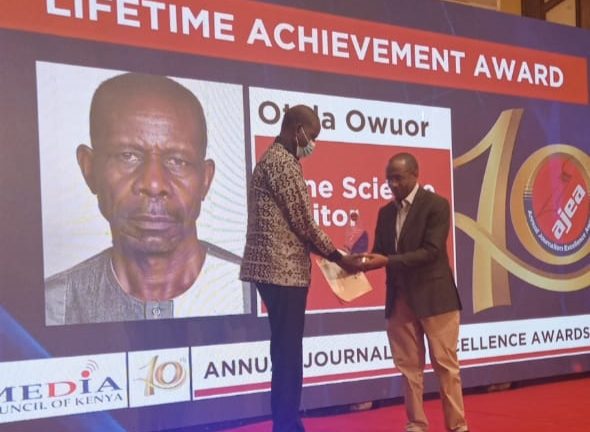 Science Africa’s Editor-in-Chief, Otula Owuor has received a Lifetime Achievement Award for his outstanding contribution in science journalism in Kenya.

This happened during the 10th Annual Journalism Excellence Awards (AJEA) held in Nairobi by the Media Council of Kenya.

The awards given since 2012 for print, broadcast and now digital journalism; are a continuous annual recognition and celebration of journalistic excellence and achievement in Kenya. Over its 10 year history, AJEA has consistently demonstrated its commitment to shining light on critical issues that shape the Kenyan society.

Otula says this award is a reflection of the journalism mentorships, trainings, and internship programs that Science Africa has had in Kenya and across the continent.

“We have trained a number and variety of interns from different universities and diploma institutions and promoted science journalism across the continent,” he said.

“We have also pioneered solutions journalism in collaboration with the Solutions Journalism Network (SJN) which has been successful as it is picking up in Kenya and across the continent.”

Otula’s numerous achievements include; serving for a decade as a pioneering science editor and writer with the Nation Media Group, establishing Science Africa, and now a renowned science journalism mentor.

He says Africa needs science more than any other continent, “and I think the journalists of tomorrow have a duty to put extra efforts in science reporting.”