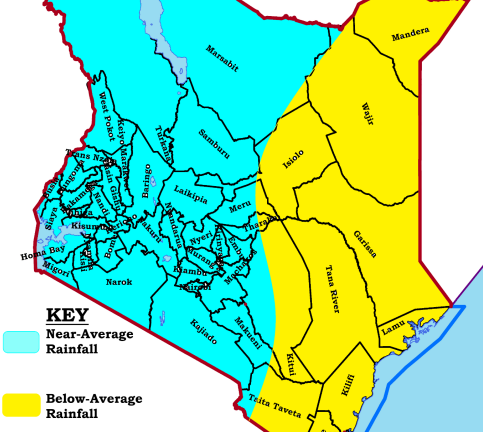 Besides high rainfall, flooding, storms and lightning strikes are also expected in some parts of the country, thus members of the public should take caution, Kenya Meteorological Department(KMD) says.

According to the monthly forecast for April, Kenya will receive high rainfall during peak of the month with occasional heavy storms expected in some days.

During this period, farming communities are advised to take advantage of the expected rains and maximize crop yield through appropriate land-use management.

The expected rainfall may result in good soil moisture to sustain vegetation growth, therefore, tree planting is encouraged in order to meet the 10% forest cover by 2022, KMD predicts.

On the other hand, the occasional rainfall expected in arid and semi-arid lands may lead to soil erosion as a result of the ongoing drought. Communities in these areas are therefore advised to put in place soil conservation measures.

Moreover, the expected rainfall may also result in occasional flooding in flood-prone areas, poorly drained urban centers as well as along rivers. Relevant authorities are therefore advised to put in place measures to avert possible negative impacts that may arise.

Also, county governments are advised to clear drainages in good time to avert artificial flooding of the urban areas. public is advised not to drive or walk through flooded rivers or moving waters.

The organization warns that there is likelihood of lightning strikes over the Lake Victoria Basin and Highlands West of the Rift Valley especially in Kisii, Kisumu, Nandi, Bungoma (Mt. Elgon areas) and Kakamega Counties. The public is therefore advised not to shelter near metallic structures or under trees to pre-empt loss of life.

The ongoing rains is also likely to lead in the increase of vector-borne diseases such as malaria over the Lake Victoria Basin, Northeast, Northwest, and the Coastal Strip. Further, cases of dengue and chikungunya fevers may also increase in the Coastal region.

Public health education on disease prevention as well as Water Sanitation and Hygiene (WASH)) should be carried out.

This may lead to structural damage to roads, bridges, and sub-standard infrastructure which may, in turn, lead to transport challenges, damage to property, and loss of lives.

Slippery roads and poor visibility during rainstorms may also pose a danger to motorists and pedestrians, especially along the Kikuyu-Kinungi stretch on the Nakuru-Nairobi Highway and the public should therefore take utmost care during the rainy period to minimize accidents that could result from such weather conditions.