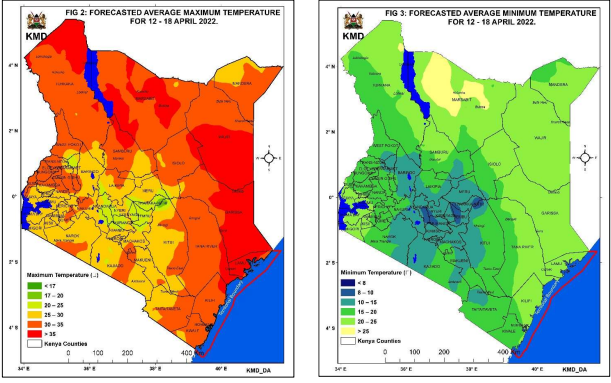 In the next seven days (12-18 April, 2022), most parts of the country are likely to experience rainfall, with moderate temperatures during the day and night, according to the Kenya Meteorological Department (KMD) weekly forecast.

In the Highlands West of the Rift Valley, the Lake Victoria Basin and the Central and South Rift Valley that is, Counties of Kisii, Nyamira, Trans-Nzoia, Uasin-Gishu, Elgeyo-Marakwet, Nandi, Kericho, Bomet, Kakamega, Vihiga, Bungoma, West-Pokot, Siaya, Kisumu, Homabay, Busia, Migori, Baringo, Nakuru, Narok and Laikipia, occasional morning rains are likely to occur over some of these places, whereas afternoon and night showers with thunderstorms are expected to spread in several parts.

In North-western Kenya (Turkana and Samburu Counties), morning rains as well as afternoon and night showers and thunderstorms are also likely to occur over few places.

The South-eastern lowlands like Counties of Machakos, Kitui, Makueni, Kajiado and Taita-Taveta, sunny intervals are expected in the morning while afternoon and night showers are likely to occur over few places.

Counties in the Coast like Mombasa, Tana-River, Kilifi, Lamu and Kwale are likely to experience showers in the morning, early afternoon and night in a few places.

In the last seven days, the KMD weather review shows that most parts of the country were generally sunny and dry. However, light to moderate rainfall was recorded in a few Counties including Embu, Nyamira and Bungoma.

Comparing the previous review period (28 March to 3 April 2022) to the current review period (4 to 10 April 2022), it is noted that there was a significant decrease in rainfall amounts over most parts of the country. On the other hand, day-time (maximum) temperatures increased throughout the country unlike night-time (minimum) temperatures which increased over few stations like Kisii, Kitui and Eldoret; and decreased over others like Nakuru, Embu and Laikipia.