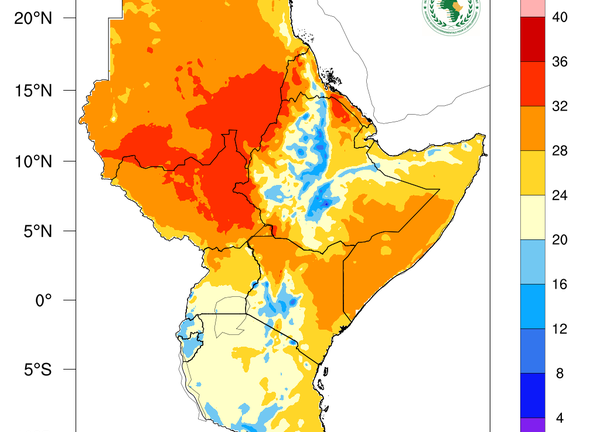 By Gift Briton and Mary Hearty

Most parts of East Africa are expected to receive low rainfall and high temperatures in the next few days (6th to 12th April), according to the Intergovernmental Authority on Development (IGAD) Climate Prediction & Applications Centre (ICPAC).

Also, ICPAC predicts that warmer than normal temperatures are expected in most parts of East Africa during these first weeks of April, with most regions experiencing moderate temperatures between 20 – 32 ℃.

Area likely to experience this include: much of central to northern Sudan, western parts of South Sudan, Uganda, much of Kenya, Somalia, Djibouti; western, south-eastern and north-eastern parts of Ethiopia, Eritrea, and much of Tanzania.

Whereas hot conditions with temperatures above 32 ℃ are expected over southern to eastern Sudan, and central to north-eastern South Sudan.

Cooler than normal temperatures less than 20℃ are expected in a few regions over central to northern Ethiopia, central to western Kenya, Burundi, western Rwanda, and few areas in south-western Tanzania.

In Kenya, the Kenya Meteorological Department (KMD) notes that despite sunny and dry conditions in most parts, occasional rainfall is likely to be experienced over few areas in the Highlands East of Rift Valley, the coastal region and highlands West of Rift Valley.

According to the government agency, Turkana, Samburu Marsabit, Mandera, Wajir, Garissa and Isiolo Counties are likely to be sunny during the day and partly cloudy at night

Other counties are expected to be partially sunny during the day and cloudy during the nights with a possibility of occasional afternoon and nights showers and thunderstorm occurring over few places.

A review by KMPD shows that there was an increase in rainfall amount in the South Eastern Lowlands and the Coast during the last week of march compared to the third week, and a decrease over North-Western and North-Eastern Kenya.