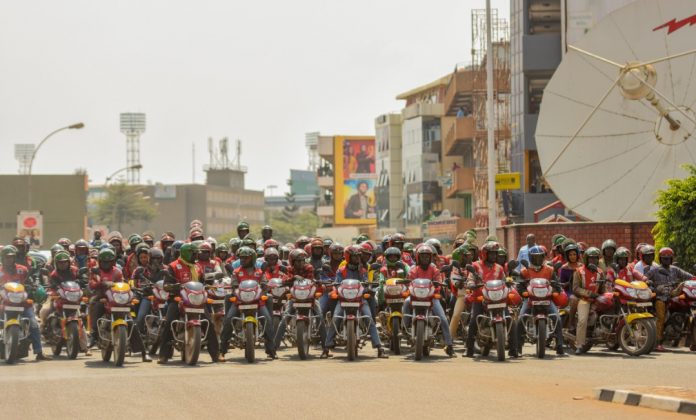 By Steven Nsamaza and John Mugisha

Before the advent of the smart metres system, the exact number of taxi-moto operators in Rwanda was unknown with municipality estimating that there were around 37,000 motor riders but only 19, 300 riders who are legally registered.

According to Rwanda National Police, most of those unlicensed commercial motorcyclists were the most suspected to be involved in various criminal activities, including violently robbing and maiming people with the help of other criminal gangs.

However, through the adoption of the technology, the industry has markedly improved. The new application ensures that moto-taxi operators are not only able to increase revenues but also to comply with strict traffic regulations in place, sources at the Rwanda National Police say.

The smart metres system, according to Rwanda Utility Regulatory Authority (RURA), is allowing taxi-moto operators to save their time using digital payment system while erasing hurdle for passengers in bargaining transport fares that used to be a source of deadly conflicts.

Other issues that the cashless taxi-moto system seeks to address, according to Dr Ernest Nsabimana, the Rwandan minister of Infrastructure, include elimination of the need for change as passengers simply pay for their fares electronically. Thus, no more time-wasting waiting for their cash balance or opportunity for wayward riders to zoom off with a passenger’s money.

Taxi-moto or abamotari, as they are commonly known in Rwanda, are most popular mode of transport in the country’s towns and cities. Since they are fast and nimble enough to enter places vehicles cannot reach, most commuters prefer them.

A popular way to get from point A to point B in Kigali – even for business people – is on the back of one of Rwanda’s major transport facility, says Nsabimana.

Since 2012, a common feature in Kigali City was that of passengers and moto riders often fighting over fare and other misconduct, including misdemeanor incidences, by abamotari riders.

It was thus not uncommon to witness a heated verbal exchange between a passenger and a rider. One such altercation I witnessed went like this: “I told you that I was going to pay you Rwf500,” she told the taxi moto rider who had dropped her home from work on a Saturday evening. “Pay me Rwf800 or else I won’t let you go,” the moto rider retorted, as both raised their voices.

Fearing not to draw much attention to herself from passers-by and neighbours, Mary Mwiza, the passenger, gave in and paid in anger and frustration. To solve such cases, the government announced a raft of changes to rein in the sector and force the operators to follow the law.

The decision to modernize the sector was approved by the cabinet in January 2018. It was part of the National Motorcycle Transport Strategy (2018) whose goals included improving management of cooperatives  and setting up of digital payments system, following the success of public buses with Tap and Go cards.

The move was seen as a game-changer in Rwanda’s ambitious plans of becoming a digital economy and establishing smart cities.

Daniel Ngarambe, the President of FERWACOTAMO, an umbrella organisation of taxi moto cooperatives says the business had been operating in a mess, with unlicensed motorists whose misconduct was casting a bad image on the entire industry.

“Before the formation of this organisation, it was all a mess as one would wake up and charge a fee anyhow or take a passenger even when not registered as a taxi-moto, so we formed the organisation after consultative meetings with taxi motorists in 2010,” he said.

The organisation came in as a solution to enhance the skills and capacity building of the taxi-moto services. In the beginning the federation started with 3,800 taxi moto riders and currently there are 46,000 taxi-motos in the country and 26,000 of them operating in the City of Kigali, all registered under FERWACOTAMO.

According to Ngarambe, unlike before, they now get enough resources to service their motorcycles, buy fuel and save the balance to take care of their families including paying rent, buying food and covering their medical insurance among others.

“We take care of their problems, for instance, as a surety for them once one decides to get a bank loan to cover for his needs and of which has tremendously increased their income margins and we have also linked them with trainings organized by different stakeholders like the police,” he explains.

“The Police, RURA and our organisation all have set up units within the administration to manage the complaints brought to their attention in regards to the behaviours of the taxi-moto riders and since they are formed in different cooperatives, each cooperative has its set rules of to be adhered to hence discipline being monitored by all stakeholders.”

Complaints taxi-moto operators have been raising for a couple of years have been heard and addressed by Ministry of Infrastructure and other relevant institutions, sending a relief in the community with scores of dependents.

Among other solutions devised was to use their cooperatives to monitor and enforce discipline and law before the police comes in.

Yego Innovision Ltd, a local ICT company conceptualized an innovative idea of smart meters to be installed on taxi-motos way back in 2016. This company designed a smart transport system that eliminated myriads of challenges that the transport sector had faced since time immemorial.

An electronic device called a “smart meter” is installed on each moto taxi. The device is then connected to fast speed internet so that it provides accurate distance travelled and exact fare tallied against both time and distance travelled.

The fare initially was Rwf.107/km, as set by RURA and calculated based on the distance. The first 2km were charged fixed fares of Rwf300 while beyond 40km, the fee was Rwf.187/km. Stopovers were charged Rwf21 per minute but later revised to resolve complaints from taxi-moto riders.

Today, the first two kilometres are charged Rwf.400 and Rwf.135/km for the rest of the journey and a notification receipt pops up at the end of the customer’s ride.

Ngaramge says the system has restored public trust and integrity of motorists. “Most importantly, we are now able to access bank loans by proving our monthly earnings as collateral,” adds Ngarambe.

To him, the GPS-enabled devices provide RURA with accurate data, which will inform decision making on industry policy. “Data is wealth,” he adds that the GPS also helps to locate the motor bike and the rider in case of any complaints. The cooperatives are tasked to ensure compliance with strict safety and good behaviour rules.

Initially, the idea to fix meters was demonstrated by Yego in 2017. The idea was to fix the taxi-moto industry that was characterized by disorganization by using technology. The unique GPS numbers fixed on each motor cycle makes the rider aware of being caught in case they get involved in any criminal activity. It acts as a deterrent. Thus, the insecurity cases involving abamotari have dropped drastically, Kulamba says.

Deeper assessment also concluded that the unorganized taxi-moto industry also posed safety and security threats to the passengers and the general public due to indiscipline.

After extensive tests conducted by RURA on Yego’s technology, RURA concluded: “Their system is agile, sophisticated and very efficient. All stakeholders have had enough time to assess their system,” Mubiligi says.  “So far, after many tests, results gave us the confidence that the system works 100%.”

“This is the perfect solution, a passenger doesn’t even bother bargaining,” says Ntaganda Amon, a moto rider in Nyanza-Kicukiro, a Kigali suburb. “It is quick, it saves time, it helps us avoid confrontations with passengers.”

For Theogene Mucyo, the benefits are countless. “Oh, this is a wonderful technology, it will save us from a lot of chaos. First, we will be able to manage our revenues efficiently, but we also will do away with constant fights between the passengers.”

Mucyo adds that, “the license fee of Rwf.10,000 charged annually to operate was scrapped after negotiations with our cooperatives, but Instead it will be a onetime payment regarded as registration of a motorist before they are allowed to operate.”

However, some taxi-moto owners decry mismanagement by cooperative leaders alleging that their contributions are swindled.

The mismanagement issue has also led to reforms where 41 organisations have been dissolved and fused them into five cooperatives.

Some taxi-moto operators are also sceptical on the digital payments and charges that go with the system while others prefer cash payments.

For users, the charges have risen, Elias Munyandinda, a regular user of taxi-moto says that, with the digital meter, the cost of transport is higher than when negotiating with the motorbike driver.

For most of passengers, beyond the first two kilometres, the amount to be paid is significantly higher and they prefer to put the meter aside and negotiate first.

Perhaps the Kenya government and boda boda sector stakeholders can learn a thing or two as they grapple with how to bring order to the sector which has become a thorn in the flesh of many in the country and the economy at large. The Rwandese three-pronged approach to regulations: administrative, statutory and self-regulation measures that makes full use of technology seems to be the way out for Kenya.

Even so, the Kenyan authorities will have to do more to fix the culture of impunity and the on-going dangerous political mobilization and conscientization based under the so-called ‘hustlers’ verses ‘dynasties’ movement that seems to be encouraging criminal behaviour among the boda boda riders.