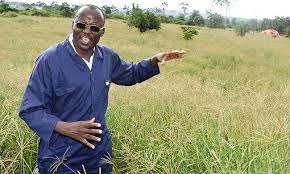 Professor Fred Kabi is an animal scientists working with Makerere University Agricultural Research Institute Kabanyolo (MUARIK). At the department of Agricultural Production at the university, Kabi is working with students and the wider community around it to produce insects for animal feed which is also for business. He spoke to Esther Nakkazi at a Kilimo Trust event.

Qn: As a university professor how do you contribute to feeding animals?

Ans: I am a professor of animal nutrition.  I teach both graduate and undergraduate  students in both theory and research and a number of them over these past few years have gotten interest in earth worm and black soldier worm production as an alternative protein for livestock and – a number of students have gotten skills beyond the book that they publish which is a requirement for graduation. The skills have enabled them get jobs and employed themselves because they can make earth worm and black soldier fly maggots.

Qn: Why did you particularly focus on insects for feeding livestock?

Ans: We are specifically interested in insects that will feed livestock and the livestock will feed people because ultimately you want to eradicate poverty using natural resources and that is the circular economy we are talking about.

Our students are really participating in this to produce alternative feeds and the genesis of this was the very high prices of Mukene (silver cyprinid fish) we wanted t come up with something that can substitute Mukene (silver cyprinid fish) because of its high demand people put in a lot of rubbish and it is adulterated. So we came up with an alternative which is earth worms and black fly black soldier fly. In this way we are responding to the challenges of the communities as a university and taking the university to the communities.

Qn: What partnerships do you have to push this issue of getting university students interested producing animal feed?

Ans: For us to do this we have received external funding from USAID to support this infrastructure to train not only tertiary institutions’ students but even those from outside communities.

Lately, we have had an association with the Swedish University of Agricultural Sciences (SLU) and we have set up a platform for the youth called Agcelerate where they learn a number of things to have hands-on skills that can enable them to make money from the agriculture knowledge they learn.

We also have the Erasmus+ funding where students are coming from Sweden to Makerere University and their major interest is Agro-ecology so they concentrate on this earth worm production and black soldier fly production. At the same time we send our students and faculty members to the Swedish University of Agricultural Sciences (SLU) and they also deal with the same issues.

In this way we have maintained a flow of knowledge aimed at promoting the earth worm and black soldier fly production in Uganda that will support organic agriculture.

Qn: How does this exchange of students and faculty from the universities help you achieve your goals?

Ans: It is supporting the students and members of staff to have a bi-directional flow – students and members of staff from Makerere University and SLU go to each other’s countries. We aim to support organic agriculture because we know that this can help us access the global market which is worth billions of dollars and that is why we want many students to gain knowledge in what we teach.

Qn: How long has been going on for and how sustainable is this?

Ans: For The Erasmus+ it has gone on for five years although the pandemic stopped students from travels but the funding which was initiated by ResilientAfrica Network (RAN) which is funded by USAID is almost ten years.

So that has been going on but even when the funding stopped because of the demand by the students to do research in this area we have been able to maintain this unit at Makerere University Agricultural Research Institute Kabanyolo (MUARIK) and I have a number of youth who are aggressively doing this and we have integrated so many of these earth worms, crickets, black soldier fly  and the youth are mad about this because they earn from it.

Qn: How do you sustain interest among the students given that the university does not do business?

Ans: We have developed a ‘do it yourself kit’ so the farmers are given training plus this kit and come and they are able to produce their own earth worms and black soldier flies. We are doing this because we work with the Uganda National Bureau of Standards (UNBS) and insects were recognised as feed for animals.

Qn: What is the end game plan for creating demand for insects as a feed for animals?

Ans: We are waiting for a time when millers will start demanding for insects as a source of protein for formulating their feed but for this to happen there must be a critical mass of producers and the university is not about to go into mass production because that is not our mandate – our is to do research. Once we have these small holder farmers in big numbers and they can be able to produce enough and we get the feed millers who can demand for this then this will be a big business.

Also maybe we need to stimulate the uptake of these insects as a source of cheap protein in animal feed with a deliberate move like a policy. This is already done in Tanzania and South Africa. We have already attained the recognition by UNBS and this is great.