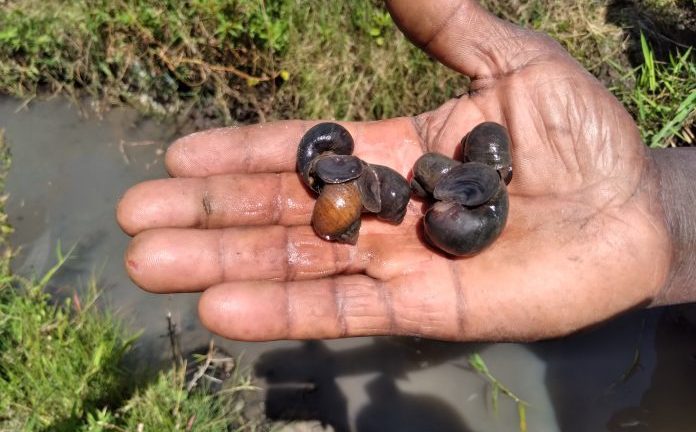 Andrew Kariuki, a rice farmer at Mwea along Nyamindi main canal in Kirinyaga County uses alternate wetting and drying technique to manage the invasive golden apple snail that is ravaging rice in the area, especially the seedlings.

So far, it is considered the most effective management option after hand-picking. The technique requires proper land preparation and planting at the right stage in order to regulate the snails.

According to Kariuki,  the rice seeds are planted in moist soil, then because the soil is black soil type, it is left to dry for up to 10 days before irrigation.  However, for those planting their rice crops in red soil, it takes about four to five days as it dries faster.

“When we irrigate the farms again, we first flash out the canals, then allow water to flow into the farms to about 2 cm height as we slowly increase the water level before draining it out again,” he explained during an interview with ScienceAfrica at a consultative meeting on the priority gaps in managing the golden apple snail.

He added that the technique is done for about 21 days until the seedling’s stem becomes mature enough because at this stage the snails cannot feed on them due to the hard nature of the mature stem.

Triza Karanja, Assistant Director of Agriculture at the Plant Protection Services Division of the State Department for Crops Development stated during the event that the golden apple snail is one of the new invasive pests that is challenging rice farmers in Mwea irrigation scheme.

Rice is the fourth most important table crop in the country. According to the National Irrigation Board, the Mwea irrigation scheme has over 30,000 acres of rice. And from this investment, the country is able to get about Ksh8.7 billion directly (about USD 71 million) and Ksh15 billion ( about USD 123 million) indirectly.

The golden apple snail is listed by the World Conservation Union among 100 of the world’s worst invasive species. Because of its highly invasive nature, which has caused serious yield loss and economic slowdown in the affected areas.

For instance, the pest infestation in Taiwan increased from 2% to 28% in rice areas within four years, in Japan, it infested 34 of 47 rice growing districts in three years while in Vietnam, all the rice growing areas were infested within five years.

In Mwea, the snail has already infested 11% of cultivated areas (30,000 acres), with 781 acres severely affected. According to the National Irrigation Authority, this is equivalent to an additional cost of Ksh22.5 million (about USD 184,000).

According to Karanja, due to the novel occurrence of the invasive snail in the country and Africa at large, they do not have the technical know-how nor materials to tackle it, including a registered pest control product that farmers can use to manage the pest.

“Unless it is managed appropriately and timely, it will contribute to food insecurity in Kenya,” she said.

Though progress has so far been made by both the public and private sectors. For instance, with support from the Centre for Agriculture and Bioscience International (CABI), Karanja said they have been able to borrow information materials that are used in Asia and other continents where the pest is found.

“We now have customized technical information on how farmers can identify this pest, including the management options,” she said.

Meanwhile, Kariuki recalled that the invasive snail species was first seen in May 2019, but its pinkish eggs and golden appearance were identified in October of the same year. By May 2020, they had significantly multiplied and spread in the area.

According to CABI, the snails are dull brown to greenish-brown or dark chestnut, sometimes with dark brown spiral bands.

They live for around one to two years in a tropical climate. Due to the warm temperatures, they do not hibernate, and reproduce throughout their lifetime, with 300-1500 eggs per clutch. They spend most of their time in the water, hence making them hard to detect, whereas the eggs are more visible.

In Mwea irrigation scheme, the golden apple snail has contributed to a significant reduction in farmers’ rice harvests.

Moreover, farmers currently report up to four sessions of replanting if not managed as the snails could finish a batch of seedlings within a night, he said. But now they are only planting the seedlings once.

Consequently, Kariuki said this technique has made farmers tend to their farms on a regular basis unlike before.

“Initially, farmers did not apply this technique because they termed it as exhausting, but now they have to use it in order to avoid further losses. We have now become experts in managing these invasive golden apple snails,” he said.

Kariuki advises other farmers to use this alternative technique instead of using unnecessary chemicals that could harm rice consumers and the environment. “Tending to your farm for only 21 days in not a long time. I have used it and it works,” he noted.

In addition, Kairuki also mentioned that he uses cassava peels to attract the snails at night and then hand-picks them in the morning for disposal. “Cassava peels are hard for them to finish faster so they take a lot of time to finish,” he said.

Before the alternate wetting and drying method was observed to be effective, youths were paid to collect the snails at a rate of Ksh100 (about one dollar) for every two kilograms of snails picked.

Isaac Muthere, another rice farmer, said they also control the snails by spraying equipment like tractors with chemicals after use, then keep them for a week before re-use.

Muthere lauded the wetting and drying technique noting that it is effective, however, he explained that since it involves leveling the land to create space for canals within the farm, the process is costly.

Muthere said the leveling helps when draining water, which is done after every two weeks. Once water is drained, the snails that had invaded the canals are hand-picked and disposed of.

In terms of harvest, he used to get about 25 bags of rice after drying his harvest, however, this has reduced to about 15 bags with each bag costing ksh7000 (about USD 58).

Another challenge he mentioned is the issue of water, especially during dry seasons when it is inadequate to flood the fields. “Once we have used all the water during dry seasons, we have to wait until it rains again,” Muthere said.

It is for this reason that he pleaded with the government to introduce suitable agrochemicals that can help farmers control this invasive snail species easily as the available ones are not effective.

Peter Chege, also a farmer and chairperson of Mwea rice farmers expressed his concern following different agrochemicals that have been introduced to them yet none is effective in controlling the snails. Moreover, he laments that it has reached a point where the invasive snails now attack mature crops.

“It is now almost three years since this invasive snail species emerged in Mwea, if we can access the right agrochemical for managing it, it would be great as it affects the production of rice,” Chege stated.

Bernard Ngari, Senior Research Scientist at the Kenya Agriculture and Livestock Research Organization (KALRO) in Mwea, one of the key trainers on the cultural technique advised that in rice schemes that are under a rain-fed ecosystem, farmers can apply drip irrigation.

However, if farmers cannot afford a drip irrigation system, he advised that they can sink boreholes and pump the water into their farms, as well as form groups to have the capacity to get more resources like the Youth Fund.

On the issue of chemicals, Ngari advised that farmers should use them only when there is a need. For instance, he explained, when an area is infested with over 50 adult snails per metre squared, then you can use a chemical.

He encouraged farmers to make use of indigenous knowledge, noting that what they are doing as researchers, farmers already have the solutions. So far, over 50% of the farmers in Mwea have been trained in this method.

Fernadis Makale, a Research Officer for Invasive Species Management at CABI during his presentation on the distribution of these snails, noted that the consequences attributed by the snail could be disastrous if the spread is not stopped, not only for farmers in Mwea but further afield into other irrigated rice production areas such as Ahero, at the edge of Lake Victoria, as well as rice production in Tanzania and Uganda.

Moreover, merchandized service providers pose the biggest threat since they can easily transport the snails as they move their equipment from the Mwea irrigation scheme to the Western and Nyanza parts of Kenya where other rice-growing schemes are located.

Hot, Dry Conditions Expected in Most Parts of Eastern Africa