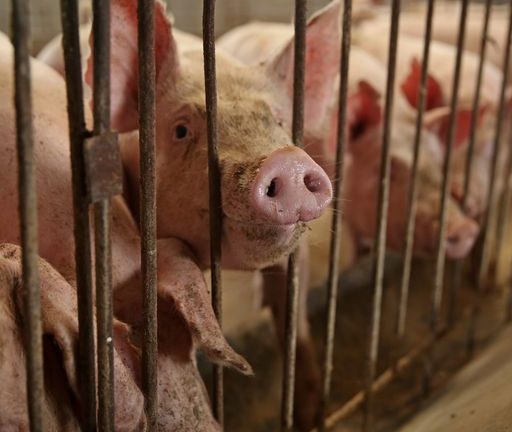 With increasing demand of meat set to expand factory farming across the globe, a new study shows that this expansion will derail achievement of the Paris Agreement goal of limiting global warming to below 2 degrees Celsius and ultimately below 1.5 degrees Celsius.

Though often, emphasis is placed on the methane that cows produce from digestion and manure, the report by World Animal Protection shows the need to shift diets away from pork and chicken also, to plant based diets if the world is to combat climate change.

From the hotspots, the report shows that land is cleared in biodiversity areas to grow crops to feed farmed animals, releasing carbon into the atmosphere and destroying wild animal habitats.

Also, deforestation to grow feed crops – especially soya – was shown to double the overall climate change impact of factory farmed meat in the Netherlands while increasing the impact by more than one and a half times in China.

Dr. Victor Yamo, Farming Campaign Manager at World Animal Protection said: “When people think of the major causes of climate change, they often think about burning fossil fuels for industrial purposes, energy and transport. But there’s a hidden climate culprit, and one that could be on your plate – factory farmed meat.

“Factory farming – either directly or indirectly through the feed chain, is to blame for the destruction of vital habitats, the displacement of wildlife, and is the largest cause of animal suffering on the planet.”

In contrast, the report finds that a 50% reduction in consumption of both chicken and pork by 2040, along with a 50% adoption of higher welfare products would halve the annual climate impacts of chicken and pork production across these four hot spots. This would be equivalent to taking 45 million cars off the road for a year in the four hot spots combined.

“We need governments to step-up to meet commitments to address deforestation and emissions by ending factory farming. They need to recognise the damage it does to animals, people and planet. We are running out of time to save our planet, and they are out of excuses not to address it,” Dr. Yamo said.

Additionally, the World Animal Protection is also calling for governments to stop approving new factory farms now by imposing a moratorium for a 10-year period, noting that governments are the key player in subsidizing factory farming and have the power to shift policy and funding decisions away from factory farming in support of humane and sustainable food systems.

They are also calling on industry to transition to a humane and sustainable food system by implementing FARMS farm animal welfare standards as a minimum, halving production of animal protein by 2040, and phasing out sourcing of monocrops like soya as feed for farmed animals.