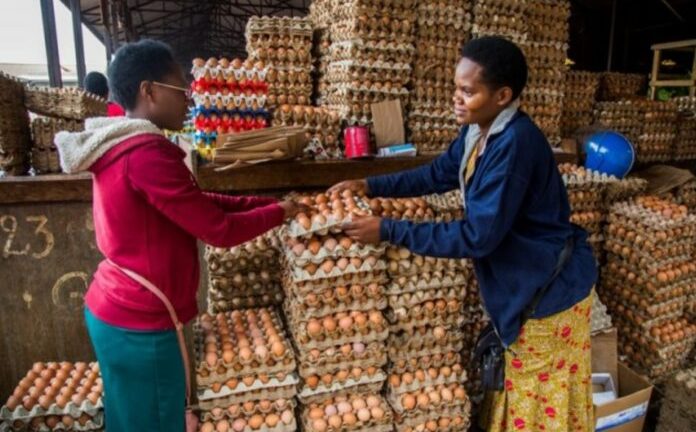 Venantie Mukanyarwaya, a resident from Ndera, a village located in the outskirts of Kigali city used to wake up every morning to beat the traffic jam as she goes to buy supplies for her small shop at neighboring Mulindi commercial center But the 25 years-old mother of three has been struggling to secure credit from the commercial banks due to a lack of collateral.

“The lack of collateral has always been a constraint for me to secure loan,” she said Instead, she decided to rely on a classical savings scheme product which allows members at community level to access loans on a competitive interest rate whenever they want.

“I normally make an application for a 100,000 Rwf (100 U.S dollars) loan a week after I begin my journey to shop for my business and the money was available in short period of times without any hindrance,” Mukanyarwaya said.

Peer-to-peer lending These classical saving groups are commonly known as “ibimina” or “Tontines”. They have been formed across Rwanda to increase agriculture productivity and promote savings culture.
These schemes facilitate members who are mostly engaged in informal business to access financing, especially small loans through a form of combined peer-to-peer banking and peer-to-peer lending.

The model is designed as type of savings group where members gather at regular meetings to
contribute a fixed amount of money and the total amount is assigned in full to each member in turn on a weekly basis.

Each cooperative is comprised of women engaged in informal business of different ages – between 20 and 65 years old. The cooperative which brings together about 34 members is based on an initiative of female street merchants who joined up their hands in order to create better commercial conditions.

Tontines are associations of relatives, neighbours, friends or work colleagues. Across Rwanda, there are tontines in all sections of society, both in urban environments and in rural areas.
These loans are charged at an affordable interest rate ranging up to 3%, so that the money deposited by group members can earn interest to be paid at a fixed installment of one year maximum.
These schemes mostly have clear and simple rules, which are observed with great discipline. Those who miss meetings without a valid excuse or disobey rules have to pay a fine ranging up to US$ 10, for example. Those who repeatedly stand out as being disruptive are excluded. Contributions are paid at fixed times, either weekly or monthly.

At each group meeting, members can decide to contribute more than the agreed minimum and can take a loan from the group without having to wait for their preassigned turn.

With access to tontine credits which are mostly approved immediately, people on lower incomes like Mukanyarwaya and who are mostly engaged in informal business in several remote rural and urban areas across the country are now increasing and diversifying their income generating activities.

This is because most of these individuals failed to qualify for commercial bank loans and access to financial services which remains the main obstacle of growth for micro and small enterprises in this East African country.

As of recently, the activity of tontine savings began to expand markedly by the increase in the
number of members and promoters.

Marthe Nyiransabimana, a resident of Nyabyondo, a village in the outskirts of Kigali city said that with the monthly savings through Tontine, she has managed to launch a new business for selling fruits and vegetables “I started by saving Rwf2,000 (2 USD) on daily basis and then moved to saving Rwf 10,000 (10 USD) a weekly. Thanks to the loan I acquired my business is prospering,” she said.

Financial inclusion in Rwanda This notion of «Ikimina» (tontine), although not widely known for a long time in Rwanda, became popular most recently especially among informal business owners who are now trying to come together periodically to deposit a fixed amount of money in a common fund.

In return, the funds are used to benefit the members according to predefined criteria.
While Rwanda targets to achieve 90 percent formal financial inclusion by 2024, latest official
estimates show that 93% of adult Rwandans are currently financially included, implying that 6.7
million are using either formal or informal products/services including “tontines” (Ikimina) to meet their financial needs.
The Country Director of Access to Finance Rwanda (AFR), Jean Bosco Iyacu explains that there are still some attitudes and mind-sets about finances with limited awareness of financial products which hinder full economic participation and financial inclusion in Rwanda.

Iyacu notes that some groups, which usually consist of a minimum of five and a maximum of 30 persons are organising themselves by putting their funds together which have helped them to
develop their economic activities.

“These savings groups are not only an engine for economic opportunity but also another important tool for financial inclusion and a resilience mechanism for many people in vulnerable situations,” he said.

Iyacu’s sentiments are echoed by other members of a savings groups in both Kigali city and its outskirts who observed that the solidarity savings groups have helped them to become resilient in their informal businesses.

Alex Niyonagira, a shoe maker and a member of one of the savings groups at Kabuga, a suburb of Kigali city observed that the groups are helping to inculcate a habit of saving noting that once individuals join savings groups, they become goal-oriented and begin to spend less on non-essentials.

“Aside from being a source of flexible loans, savings groups are encouraging people to be more disciplined in terms of managing their incomes and focused,” Niyonagira said.

Tontine Vs traditional banking system Latest report jointly published by Access to Finance Rwanda (AFR) in partnership with National Bank of Rwanda, Ministry of Finance and Economic Planning and National Institute and of Statistics Rwanda indicate that overall financial inclusion has increased slightly from 86 percent in 2016 to 88 percent in 2020 meaning that only 12 percent of people are financially excluded.

Education, employment, income generation is one of the main drivers of financial inclusion, but people should be advised on which saving product to use between tontine and traditional bank account depending on their specificities, according to the analysis.

Financial literacy specialist Jean Jacques Semanza who has worked extensively with savings groups noted that the flexibility of informal savings groups at community level in terms of giving out loans and repayment arrangements make them appealing to the poor.

“Savings groups have thrived and continue to do so at community level even now because, unlike
other financial entities, they respond as well as adapt to the needs of communities,” Semanza said. Savings groups at community level have proved to be the most consistent and sustainable platforms for economic development and growth in developing countries.

They are now considered to be a reliable and sustainable way of empowering poorer communities and are increasingly becoming the cornerstone for expansion of financial inclusion, especially among the rural, unserved and underserved population groups the world over.

Yet tontines are adapted to a wide variety of financial structures ranging from informal to formal businesses, some economic experts stress that the development of a savings culture is not only appropriate for individuals, but for businesses too.

Additionally, they stress that when people save money with formal financial institutions, there is a return interest to the saver unlike with tontines.
However, for Mukanyarwaya joining the classical credit and saving group is expected to put an end to her deplorable situation.
“Adopting a savings culture through classical scheme has proven to be vital for people engaged in informal business,” she says.

With little effective regulation for most tontines in the country, it has been challenging for the
majority of people to take loans until all group members have repaid.

Despite the main advantages for granting fixed loans without the usual collateral, some economic experts also deplore the lack of flexibility in repayment schedules.

“There have been numerous cases of lenders who failed to repay back and this has negatively
impacted other people to continue gaining access to a loan,” said Dr Canisius Bihira , a
microeconomic expert based in Kigali.

This story was first published in royalfm 94.3