[KAMPALA] Researchers say they are making rice farming in East Africa more sustainable by promoting the adoption of innovations such as recycled crop by-products, improving food security in the region.

The Reduce, Reuse, Recycle Rice initiative for Climate-Smart Agriculture (R4iCSA), involving 5,000 smallholder farmers in Uganda and Kenya, also aims to encourage the use of sustainable management practices such as integrating rice and legume cultivation to improve soil health.

“The research is generating evidence of developed and tested business models in using products and by-products of rice to drive scaling up the models,” says project leader Anthony Mugambi Makona, an agricultural value chains development and market access specialist at Kenya-based Kilimo Trust, which is implementing the project.

Rice by-products can be reused in farming to improve uptake of nutrients and enhance water-holding capacity in sandy soils. They can also make crops more resistant to disease and facilitate the binding and decomposition of plants.

The R4iCSA project has enabled rice farming to be more integrated with other related business models being tested, through the use of products such as biochar, a super charcoal made by heating rice husks without oxygen, according to Makona.

Crop wastes eliminated through the process of making biochar produce no smoke. Adding the product to the soil not only benefits farmers but also has the long-term benefit of reducing greenhouse gases that contribute to global warming.

Other products that can help farmers include a liquid extract derived from organic vermicompost produced from red worms, commercial maggots for animal feeds, and organic compost production using rice bran, Makona tells SciDev.Net. Rice by-products such as rice straws and rice husks can also be used in mushroom production, he adds. 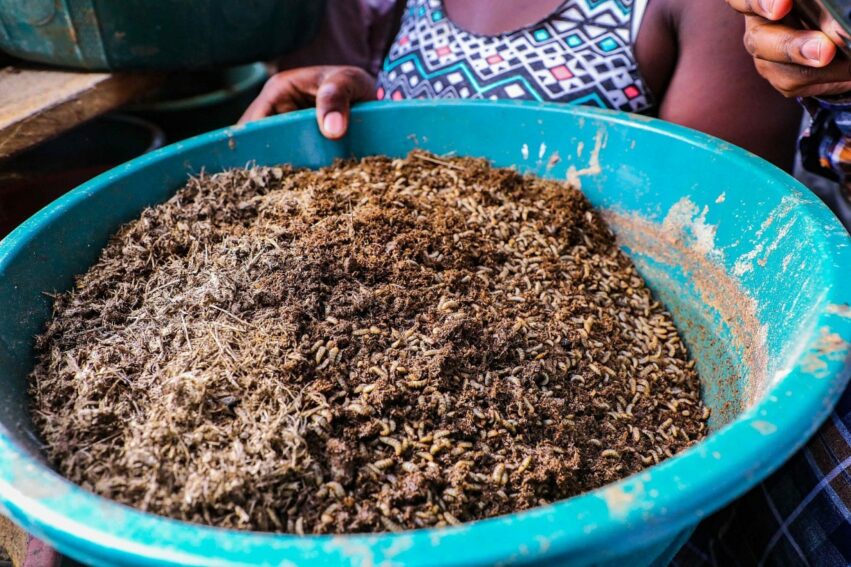 The researchers, he explains, hope the initiative will increase rice production and the reliance on imports brought about by the rise in rice consumption in East Africa, where at least 1.5 million farming households depend directly on rice for food and income security.

In the two-year pilot project which began in 2020, the use of rice farming by-products has contributed significantly to conserving and rehabilitating food and farming systems, say the researchers, while rice and legume integration has improved overall soil health.

“We want to see at least 50 per cent of our farmers adopt sustainable rice farming practices.”

“It took the researchers two years to test the technologies, build business cases and influence policy in Kenya and Uganda, and the next phase is set to be scaled up to cover more rice growing farmers in the East African region,” says Makona. “We want to see at least 50 per cent of our farmers adopt sustainable rice farming practices.”

Most rice farmers practice monocropping, which leads to accumulation of soil pests, but when they change the cycle and have rice legume intercropping the legumes fix the nitrogen and rotating crops reduces pests, Makona adds.

Farmers involved in the project are using by-products of rice such as rice straws to grow mushrooms and rice husks to make biochar, which is used as a fertiliser to improve soil health and boost farming. They also use earthworms and black soldier flies to produce silage — fodder such as hay or corn converted into feed for livestock through anaerobic bacterial fermentation. 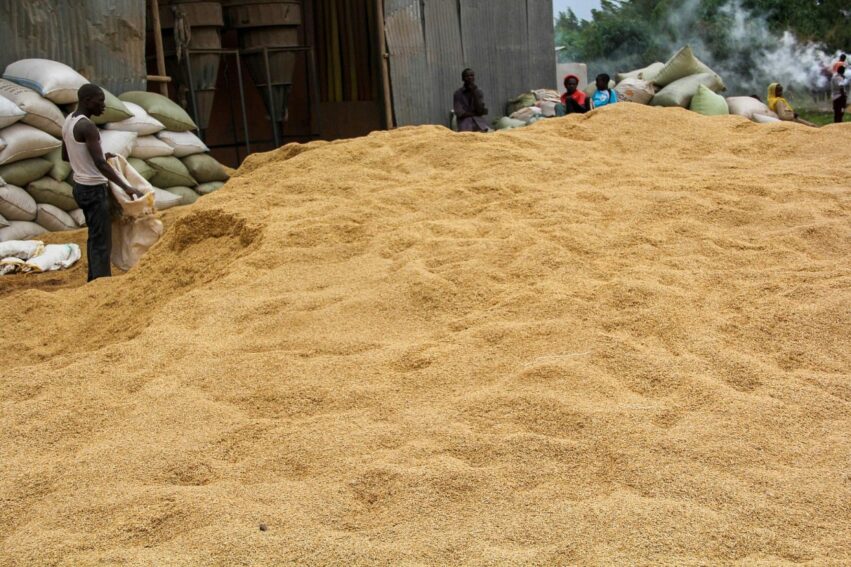 A pile of rice husks at a mill in Eastern Uganda. Many by-products can be made from husks. Credit: Kilimo Trust.

Makona says they want to build an ecosystem of all players in the rice farming value chain working together from farmers and millers, to processors and by-product users. “This will create a circular economy,” he explains.

Andrew Ebong, Bongomin Group Ltd chief executive officer and a rice farmer in Mbale district of Uganda, tells SciDev.Net: “We are encouraged to use the concept of 3Rs — reduce, reuse, recycle — rice initiative for climate smart agriculture to teach farmers that they can use their crops well in a manner that they can ensure restoration or regeneration after they grow rice.”

The R4iCSA project has built a number of private-public partnerships to help smallholders, says Makona.

“We feel that if a company that produces processed rice is linked with farmers, they are able to produce rice husks which can be carbonated to produce biochar that farmers can use for fertilisers,” he explains.

“I have trained a number of youths who are aggressively doing this, and we have integrated so many of these insects — earthworms, crickets, and the black soldier fly in the food chain. The youth are [embracing] this because they earn from it,” says Fred Kabi, an animal scientist with MUARIK. “We are specifically interested in insects that will feed livestock and the livestock will feed people because ultimately you want to eradicate poverty using natural resources and that is the circular economy we want.”

“The intention is to intensify rice production while at the same time caring for the environment. We tell rice farmers that continuous flooding of the rice fields is not beneficial in any way. They can flood the fields and drain them as they use water efficiently to grow rice.”

Agnes Kirabo, executive director of Food Rights Alliance in Uganda, explains that many smallholders are unaware of the importance of providing livestock with quality feeds.

“Traditionally, we all grew up knowing that [farm] waste goes to animals and that is why people do not mind the quality of the feed they give to their animals and yet the poor-quality animal feed goes through to make the food very unsafe for human consumption,” she says. “More often, the biggest percentage of animal keepers in Uganda are feeding their animals on sub-standard, poor-quality feed, and this affects the entire food chain system.”

This piece was produced by SciDev.Net’s Sub-Saharan Africa English desk.