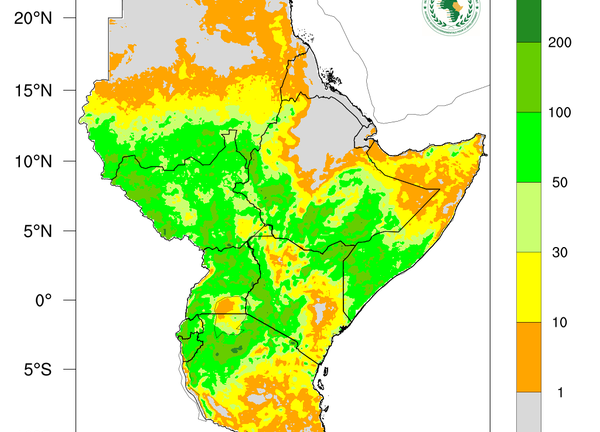 Most parts of Eastern Africa will receive more than normal rainfall with moderate temperatures in the next seven days.

This is according to the Intergovernmental Authority on Development (IGAD) Climate Predictions and Applications Centre (ICPAC) weekly weather predictions. Further, heavy rainfall is expected over cross border areas of Ethiopia, Somalia, and Kenya, and isolated areas in northern Tanzania and southern Kenya.

However, moderate rainfall ranging from 100mm and below  is expected over most parts of Uganda, South Sudan, Burundi, Rwanda, northern Tanzania, southern Sudan, and western Ethiopia.

Other regions over north-western and eastern Kenya, northern Somalia, north-western Ethiopia, central Sudan, and isolated places over central to southern Tanzania are likely to experience light rainfall less than 30mm.

While regions over most of Sudan, South Sudan, Uganda, most of Kenya, Somalia, Djibouti, western, south-eastern and eastern parts of Ethiopia, Eritrea, and most of Tanzania are likely to experience moderated temperatures ranging between 20-32 degrees Celsius.

Hot conditions above 32 degree Celsius are expected over parts of southern and eastern Sudan, and north-eastern Ethiopia.