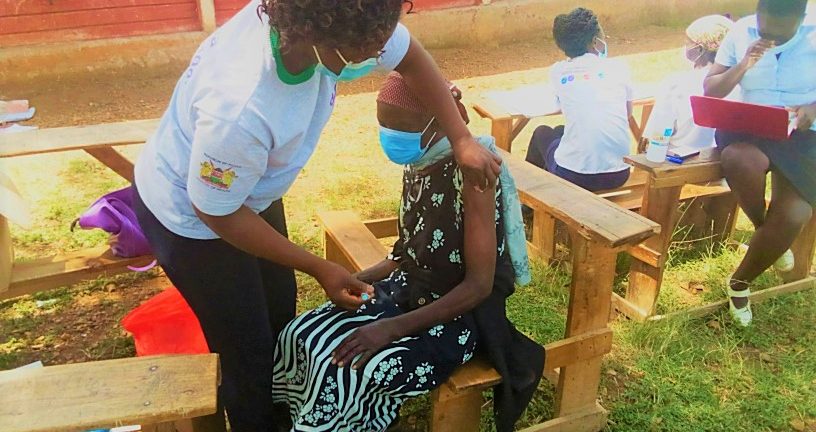 Homabay County is one of the counties that have recorded significantly lower number of people who have been fully vaccinated since the rollout of COVID-19 vaccines began, according to the Ministry of Health (MoH).

As of 8th January 2022, the MoH reported that Homabay had 7.5% of fully vaccinated population out of 608,326 target population above 18 years, with only 16.3% having received at least one dose of the vaccines.

To help boost vaccination uptake in the county, MoH in collaboration with the Center for International Health, Education, and Biosecurity (CIHEB) and the Program for Appropriate Technology in Health (PATH) have been conducting a mobile COVID-19 vaccination outreach initiative for 29 January 2022.

Tuphena Akoth, 27, resident of Ng’oche Village in Karachuonyo North Sub County are among those who have benefited from this initiative. She just walked a few minutes to the outreach centre in Ng’oche Primary School to get her first dose of the jab.

“I could not get vaccinated earlier enough due to lack of money for transportation to the nearest vaccination site. So when I heard about this initiative in Church, I decided to go for my first COVID-19 vaccine dose,” Akoth explained.

The distance from Akoth’s place to the nearest health facility that administers vaccines, that is, Kendu Adventist Hospital is about 5km. The most common means of transport is motorbikes, also known as “bodaboda”, which charges about one US dollar to and fro.

Mary Ajwang’, 73, residing in the neighboring village known as Simbiri could not access the vaccine at the nearest outreach site because she has been feeling unwell.

Ajwang who suffers from rheumatoid arthritis said: “When the health workers were conducting the vaccination outreach in Kosele near my home the previous day, I could not make it due to the joint pains in my legs, so I decided to get my Johnson and Johnson vaccine in Ng’oche Primary.”

Whereas, Wilberforce Odera, 34, from Kochung’ Village, being a domestic worker in one of the homesteads within his village, was grateful for the outreach program as he finally got the opportunity of receive his second dose of the vaccine.

He stated that the outreach program gave him the opportunity to get his second jab of AstraZeneca vaccine, although two weeks later than the scheduled date.

“I have always been busy with work. So bringing the vaccination program closer to us has greatly helped me. I have saved so much time compared to going to the health facility,” he said.

Jane Awuor, a resident from Kosele who also got her first dose of the vaccine during the mobile vaccine outreach program in Kosele said she was initially skeptical about getting the COVID-19 vaccine jab. However, with the help of the community health volunteers who were mobilizing the community on this program, she made an informed decision to get herself vaccinated.

Even though health experts say COVID-19 vaccines are the key tools that will underpin the global route out of the pandemic, vaccine hesitancy -delay in acceptance or refusal of vaccines- remains among the major concerns that Africa, Kenya included is still facing.

Community health workers (CHW) are an integral part of the infrastructure needed to reach all people, especially when addressing vaccine hesitancy at the local level.

Pauline Achieng’, one of the community health volunteer (CHV) within Karachuonyo Sub County, has been mobilizing the community members within the Sub County during the 10-day mobile vaccination outreach program though door to door campaign.

Achieng said: “These people coming for vaccination are our people; we are conversant with the language they speak so convincing them to get the COVID-19 vaccine is easier.”

Besides, an analysis of research on Rwanda’s national vaccination program showed that local ownership, including roles for CHWs that include vaccine education, community mobilization, data collection on immunization status, and identification of households missing vaccine appointments, was critical to the near universal vaccination coverage rate.

Cloy Obala, Vaccination and Immunization Coordinator in Rachuonyo North Sub County Cloy pointed out despite taking the vaccine to the community level, vaccine hesitancy is still a challenge because some people are skeptical about them.

Obala adds: “But the number has improved during this initiative compared to initial vaccination.”

The seven wards comprised of 11 teams- health facilities, involved in the administration of the vaccines at the grass root level. Each team had a target of vaccinating 100 people per day.

With the help of the CHV, each team vaccinated over 60% of the daily target population. For instance, in Kendu Town Ward in Karachuonyo North, 75 out of 100 people were vaccinated on the first day; followed 63 and 64 people in the second and thrid days.

By 13 February 2022, vaccination in Homabay County had increased to 18.7% of the target population above 18 years while 2,615 had gotten their booster dose, according to data from the MoH.

The vaccination outreach program had an additional seven days as phase 2 of the initiative because there were a lot of missed opportunities due to shortage of vaccines and personnel.

For instance, “Many breastfeeding mothers who were willing to be vaccinated in phase 1 in some outreach stations like Ng’oche Primary School did not get the Pfizer vaccine. In Kochung’ station, we only had 6 doses of the Pfizer vaccine,” Alice Otieno, a Nurse from Kendu Adventist Hospital and a vaccinator intimated.

Pfizer was administered to the breastfeeding mothers because it is considered safe and effective for both the mother and the baby. Moreover, this was a presidential directive.

In phase 1, only 11 facilities participated but currently Obala affirmed: “we have 15 facilities in phase 2, and these facilities have been paired with the initial facilities.”

Out of the 15 facilities, eight were previously trained at the County level whereas the additional ones, “we have done for them on-job training as well as supervision to ensure they are able to administer the vaccines effectively during the mobile vaccination outreach,” Obala said.

Obala noted that Wague Health Centre was also trained but, it did not participate during the initiative due to lack of enough healthcare personnel, adding

“There is only one nurse covering both routine and other duties within the facility. So we had to bring in the neighboring facility- Nyaoga, which was among the additional seven facilities.”

“To ensure effective administration of the vaccines, we took one nurse from these facilities and paired them with nurses from the initially trained facilities.”

According to the Vaccination and Immunization Coordinator, they selected two healthcare workers, two vaccinators and one health records officer from each facility to help with the rapid vaccination initiative.

Obala acknowledged that less challenges were experienced in phase 1 of the initiative, however, with phase 2, there was a shortage of vaccines as many people missed the opportunity of getting vaccinated.

“Day 1 and Day 2 of the second phase, some teams went to the field with zero stock of antigens. Currently, we are having Pfizer, Johnson and Johnson, and AstraZeneca. In some places, you find that majority of the population have already received the first dose yet the healthcare workers have only one antigen which is different from their first dose,” Obala elaborated.

Nevertheless, the Sub County Vaccination and Immunization Coordinator said they received additional vaccines: 1650 doses of Pfizer, AstraZeneca 750, and then J&J 300, which had already been re-distributed.

Another challenge they encountered was keying data physically which she elaborated: “Maybe 1000 people have received the injection but in the system, only a quarter have been keyed in.”

To ensure effective co-ordination and communication within the Sub County during the mobile vaccination outreach program, Cloy added that they also created a WhatsApp Forum with all the personnel involved including Assistant County Commissioner (ACC), the team supervisors, Sub County supervisors, the vaccinators, health records officers, CHVs, as well as other healthcare workers.

The ACC assisted with mobilization of the members of the communities with additional support from the CHV; analysis of every ward; and project coverage.

“We invited the ACC because he was involved in the mobilization of chiefs and assistant chiefs. In turn, this helped every team to project the daily coverage of each ward,” she said.

In order to achieve herd immunity in Kenya, WHO recommends robust community engagement to address issues such as misinformation on COVID-19 that influences vaccine hesitancy among the community.