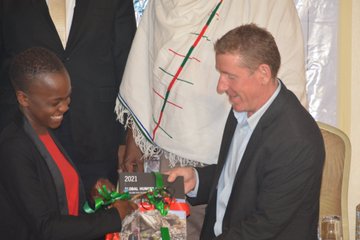 By Gift Briton and Thomas Muia

Ranked 87th globally, Kenya is among the countries performing poorly in the fight against hunger, according to Global Hunger Index (GHI) report 2021.

The report shows that 24.8% of the country’s population are undernourished, child wasting (low weight for their heights) is 4.8 % while stunting (low heights for their age) is 25%.

The GHI is calculated by looking at the four indicators of hunger: undernourishment and  child wasting, stunting and mortality rate.

The report gives Kenya a hunger level score of 23.0, making it among the 47 countries globally with serious hunger level.  The scores range between 0-100, in which countries with lower figures reflect low levels of hunger.

Speaking during the GHI 2021 report launch, Kelvin Shingles, the Country Director of Welthungerhilfe (WHH) said that since 2000, the GHI score in Kenya has reduced by 37.3%.

“If we look at the statistics over the years as I have mentioned, from 2000 to 2012 we’ve seen some steady progress but from 2012 to 2021, the progress is minimal. It means that the fight against hunger is slowing or even stalling here in Kenya,” he said.

In the report, three factors were highlighted as the key drivers of hunger: conflicts, COVID-19 and climate change.

Shingles said that the increasing level of conflict is a destruction to every aspect of the food systems. Furthermore, climate change is a triple multiplier of hunger and is already increasing food insecurity through high temperatures, change in precipitation patterns and frequent extreme weather events such as floods and drought.

He mentioned that the Northern part of Kenya is the most hit region by hunger in the country. This is because of the drought and conflicts experienced due to insufficient pasture and water.

Noting that the northern part is affected by high rates of poverty and government expenditure in these areas is also very low, Mohammed Guleid, Chief Executive Officer (CEO) Frontier Counties Development Council (FCDC), Kenya, called for government to increase investment in that region.

Amina Abdulla, the Regional Director for Concern Worldwide noted that Kenya is not devoid of policies but the problem is in the implementation and resourcing.

She noted that there is need for concerted efforts and multi-partnerships of different stakeholders including government, private sector, non-governmental organizations, youths and the general population.