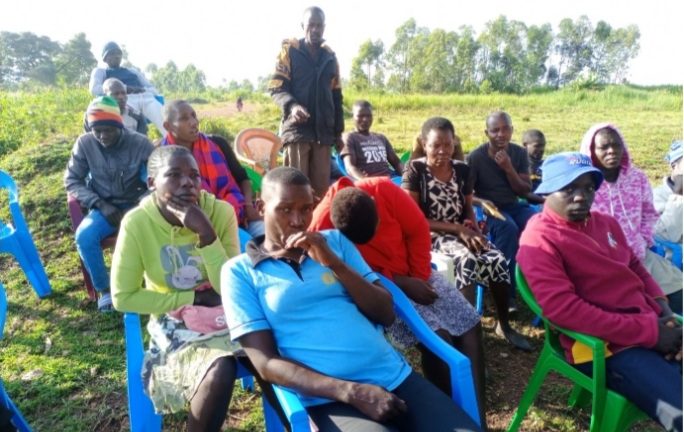 Under Kenya’s Vision 2030, the country aims at transforming into an industrialized middle economy country offering high quality life to its citizens in a clean and secure environment.

One way of achieving this is through the formation of Savings and Credit Cooperative (SACCOs)- formed when a group of people voluntarily meet together to start a savings and credit group to meet their economic, social and cultural needs.

SACCOS are distinct from other financial institutions, in that they are user owned, user controlled and user benefitted organizations.

Currently, according to Wakandi, 2021, there are over 22, 000 SACCOs in Kenya with membership being drawn from different groups including SACCO including farmers, workers and small or medium scale business persons among others.

In Rongo Sub County, a group of Motorcycle taxis popularly known as Boda-boda riders have come together to start their own SACCO known as Miseyo Bodaboda Group.

“The idea of forming a SACCO came as a result of peculiar challenges we face as boda-boda riders that are not faced by other players in the transport sector. Boda-bodas in Kenya are mostly owned by low-income earners and the profit margins are not high enough to provide a decent living,” Elvis Otieno, chairman, explains.

“For example, a boda-boda rider might not afford to take three days off from his job in case of emergency. In case of an accident or sickness, most people are forced to sell their motorcycle and any other asset they might have to cater for expenses. It is the need to empower ourselves economically and socially that we decided to start a SACCO.”

“We have 50 active members in our SACCO who are seeking to empower themselves economically. We started the SACCO in September 2020 and we are fully registered and regulated by The Sacco Societies Regulatory Authority (SASRA),” says Antony Odhiambo, secretary general of Miseyo Bodaboda group.

“Even if the profit margins of Bodaboda are not high, with prudent financial management practices it is possible to attain economic stability. The SACCO offers a place where members can save and borrow to expand their business for economic growth.”

Odhiambo notes that they have a registered bank account as a group where they save money collected daily.

He adds that the treasurer is in charge of making weekly deposits and for any withdrawal the signatories including the chairman, secretary general and treasurer must approve.

According to Olivia Achieng, assistant secretary of the group, the SACCO was a brainchild of Bodaboda riders from the region but just like any other SACCO in the country everyone is welcomed to join.

“In the group apart from bodaboda riders we have farmers, miners, local government employees and business owners. Not only does it empower us economically, it also helps us solve social problems affecting us,” she says.

Odhiambo explains that members save on a weekly basis with the minimum amount a member can save to the development kitty being kshs. 200 per week (approximately $2).

Apart from the development kitty, the group also has a social welfare kitty which they contribute on a needs basis.

“The development kitty is the one we use to lend out cash to our members. We give out loans to our members according to how much they have saved. You can take maximum of 80% of your savings. For example, if you have save kshs. 100,000 (about USD 1000) you can request for a loan of kshs. 80,000(about USD 800),” Odhiambo explains.

“We do that to make sure that in case a member faces difficulty in repaying the loan there will be no auction of his assets like it happens in banks and micro finance institutions.”

However, if the member does not pay their loan during the stipulated time it is automatically deducted from the member’s savings account.

“This is the reason we do not give out a loan equalling 100% of your savings so in case you fail to pay the amount is enough to foot the principal amount plus interest rate which is 7.5%. For those who do not need a loan their savings keep growing and are converted to shares at the end of financial year,” Odhiambo says.

Otieno explains that the social welfare kitty is to sort some of the problems they experience which is peculiar to them unlike other players in the transport sector.

For example, he says, most of the youth who ride the motorcycles do not own them. They rent for a day and pay kshs. 500 (about USD 5), and after incurring fuel and other operational costs, they make on average ksh. 400 (about USD 4) profit in a day.

“With the high cost of living, the money is barely enough to sustain them and their families. When a child becomes sick, it becomes hard for them to foot the medical bill. As a SACCO we come together during such occasions and contribute to help the member. We are also aiming to start a program where we will be contributing so that each member can have a medical insurance cover,” the chairman adds.

According to Brian Otieno, a member, the group has become his family.

“Sometimes I have taken a passenger to someplace and my motorcycle breaks down. Unlike in the past, I know I can call one of the members to come and rescue me,” he says.

“Also, with the money I make, it is not enough to get medical cover for my young family. I am happy about how the group pools together to help members during medical emergency and any other social emergency.”

Kennedy Omollo who is a boda-boda rider and also gold miner appreciates how the SACCO has made him grow.

“It is very hard to save individually but easier to save as a group. I have been saving with intent to buy a new motorcycle and it could not have been possible without the group,” he says.

“My goal is to have seven motorcycles in the next five years. With the profit I will be getting, I will be able to buy better machines for my gold mining business.”

According to Achieng, members are always encouraged to explore different economic activities for sustainability. For example, during rainy season members can take loans to buy seeds and fertilizer for farming.

“As a group, we also rent land where we farm maize. Once we sell, we put the proceedings in our development kitty. This gives us more capital in which our members can borrow from,” she notes.

Morris Otiwa, a member of the group says before they formed the SACCO, they were at the mercy of loan sharks.

“When we indulge ourselves to economic activities like farming it makes sure that we will not need to partner with other financial institutions who charge high interest rates,” he says.

Odhiambo says apart from farming the SACCO is exploring other economic options, including buying motorcycles for their members or even buses.

The goal of this group, he adds, is to eliminate poverty and I am grateful for the dedication shown by every member through prompt contributions and commitment to projects agreed by the group.

While the SACCO is changing lives of their members and their families, challenges still remain.

“As members we have contributed and bought the land we hold our meetings but we are yet to get enough money to build an office and meeting halls. As such we meet in open space which is quite difficult during extreme weather conditions,” Otiwa notes.

The chairman points out that another challenge is the weekly contributions where they would wish even to contribute Sh 1000 (approximately $10) per week to enable them fast track most of the development projects and also make it possible for members to take higher loans.

“It is not possible for most of our members since their income is low and that is why we have pegged minimum contribution at kshs. 200 (about USD 2),” he says.

The model of members taking 80% of their savings as a loan also has its disadvantages, according to Achieng.

‘Since members know their savings can comfortably pay back their loan, some members do not put effort to repay the borrowed amount,” she says.

“They default and request the amount to be deducted from their savings which makes it hard to grow as a SACCO.”